Tool to monitor temperature of hardware components in Windows 10

Result: List of IP addresses that respond to ping on the specified prefix
Posted by Bradley at 10:20 No comments:

Instead of installing a third party application which has the possibility to have spyware or other bad stuff in it. If you only need to do a ping sweep with no additional features it's probably easier just to do it in CMD.

SSH into the synology device 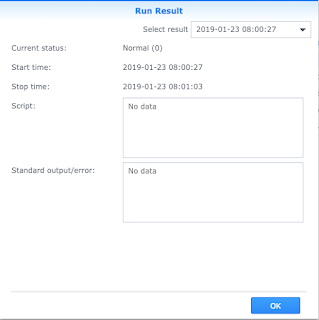 However, the results are appearing properly in the email notification and when I reduce the amount of output by modifying the script a bit it displays properly as well
python speedtest.py --no-download --simple

You can automatically log the output of any script to a file as well in Task Scheduler.
This can be done by going to the Task Scheduler app, Settings, enabling output recording, and specifying a directory to store output.

The way in which I managed to fix it is by rebooting the system, going into grub.

Pressing 'e' on the boot loadeder and adding "init=/bin/bash" to the end to boot to a bash prompt.

where the -r resets login attempt
Posted by Bradley at 08:38 No comments:

Robocopy does not have any built in bandwidth limiter by rate specifically.

But what you can do is use the inner packet gap switch /ipg:n to simulate a lower bandwidth by adding more delay between packets.

The equation to use to calculate is as follows:

I never quite understood why when you changed .bashrc you had to type the source command in order to make changes active.

Now I understand and it's fairly straight forward.


Any newly spawned bash processes for scripts will fork off of that process and be given a new process ID.

The above will make all variables in script.sh available to your local shell at echo $$

The above will make all variables in script .bashrc available to your local shell at echo $$
Posted by Bradley at 06:06 No comments:

A website which shows you which episodes of which animes are fillers and which ones are not
http://www.animefillerlist.com/

Another site:
http://www.fillerguide.com/episode-list/naruto-shippuden/1-50
Posted by Bradley at 16:26 2 comments:


Register with RedHat to gain access to their repos


Repos will be populated automatically upon registration and you can then list them using:


Download the repos to a path of your chosing


Create the repo against the directory where your rpm packages exist


Ensure the repo works, this will likely build the index at the same time. I've seen elsewhere where cache is refreshed using yum makecache but I haven't run into a scenario where I have to do that yet.