Some of you may have noticed that the black levels in media centre end up looking a bit grey.

The main reason for this is that Windows intended for media centre to be used on a television monitor which only supports black levels from 16-235. So if you are viewing Media Centre on a computer LCD display which generally support 0-255 black levels you are definitely missing out on some of you blacks and thus lacking quite a bit of contrast in your picture.

I found the solution to the issue at the following website http://www.hack7mc.com/2009/06/fixing-media-centers-poor-black-levels.html which provides a registry edit for Media Centre to change your black levels to 0-255 to give you the full amount of black levels that your monitor supports.

Another option that would be available might be through your video card. Sometimes you will be able to set permanent black levels that will hold for every application you open via your video card settings console.

For example you can change your black level settings from older versions of Catalyst Control Center through some of the display options. You can see instructions on how to do that from the following forum post http://www.avforums.com/forums/home-entertainment-pcs/1372169-guide-how-upscale-dvds-video-using-catalyst-control-centre.html or just reference the following screenshot and find your way there visually :P 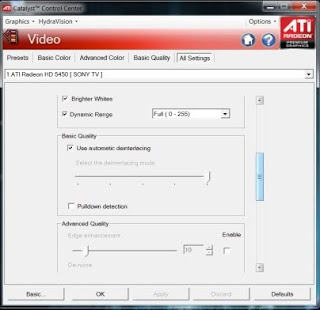