There are only 3 address types, and IPv6 does not have broadcast addresses.

All of the above represent the exact same address, just a way of reducing address size by compressing out zeroes.

Zone ID's typically make it easier to identify interfaces tied to IPv6 addresses
Example:
An IPv6 address is assigned to a host interface
Interface "8" has 2001:db8:cafe:5150::1

To represent a zone id use a %


Typically the Zone ID will match interface ID
So in linux systems you can have something that looks like:

The total global unicast address space is 2^128 and we're only starting with 1/8 of the total available space when using 2000::/3

2000-3fff are the beginning hextet

Each network that we would run in a lan has the amount of IPv4 addresses squared. So a /64 is effectively (total IPv4 address space)^2

IANA has all of the addresses these are handed out to APNIC, ARIN, and RIPE which are registries. 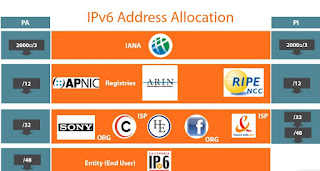 IANA is holding 3000::/4 addresses in reserve as global unicast until we're ready to give out more.

Link-local is designed to be unique on a link like private subnets routed between each other.

Bogon addresses are addresses you would not expect to see on your local segment coming from outside of the internet.

Allows hosts to discover other hosts on the same layer 2 ethernet segment. It uses multicast.
Replaces the function of ARP in IPv4

IPv6 packet is sent to destination which is a solicited node

A solicited node address is an address that exists for each IPv6 address on a host.

Once this solicited mode address is built up it installs the multicast address on the NIC to listen for traffic from other devices to discover each other.

The Neighbor Discovery Protocol (NDP) process uses Solicited Node, Mulicast, and ICMPv6 to do its discovery

There is a cool protocol that allows for link local name resolution using multicast because IPv6 addresses are so hard to remember the two are:
mDNS - mainly used by Apple - ff02::fb
LLMNR (Link Local Mulicast Name Resolution) - Microsoft mainly uses it - ff02::1:3

Typically requires the use of routing protocol to inject routes

Source wants to talk to the anycast address: 2001:db8::1
Routers will control the propagation of the anycast address throughout the network.
The servers themselves inject information into the router to let it know its status/availability. Then the routes communicate this availability to the rest of the routers in he network.
The routers will also know which machine will have the lowest cost or will be quickest to get to through the magic of routing.

Type and Code fields are different than ICMP 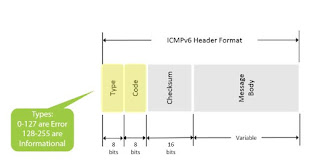 Combination of type and code will tell you what is happening.

Ping and traceroute work the same.

Prior to sending a payload the router will be able to recognize that the MTU on its outbound interface is smaller than what it is expecting to send and will send back an "ICMPv6 Packet Too Big" message and will not attempt to fragment.

Allows you to discover devices on the same link using ICMPv6 neighbor discovery.

Counting in hex will give us our subnet mask bits since each character represents 1 hex character. Which represents a nibble which is 0000 through 1111 in binary or (0-9 and A-F) in hex.

However providers will typically allocate /48 address space giving you 16 bits to "subnet" with.

defines how packets are routed out of an interface for ipv6

gives precedence to some local prefixes vs global

Instead of IPv4 which:
PTS - points to in-addr.arpa 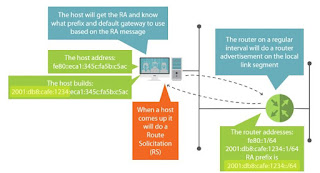 Once you setup an IPv6 address on Cisco IOS it will by default send out RA's unless you specify not to.

DHCPv6 does not provide default gateway information so RA's are required to distribute this information.

Preference values are defined to break ties if there are multiple routers on a local LAN segment.

Failover can take some time as RA's are transmitted on regular defined intervals. Thus it is recommended to use VRRP or some other HA technology to make multiple default gateways highly available.

What are the use cases of RA 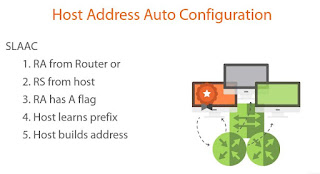 Neighbor Soliciations and Advertisements do the same function as IPv4 ARP

Jumbograms are a function available in IPv6 which allows the payload length to exceed the theoretical limit for IP MTU and is only a Layer 3 function.